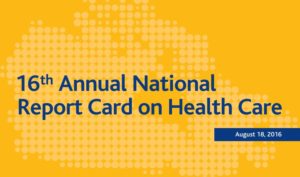 As a family physician in Nova Scotia, she already sees long waits for home care, consultants and

long-term care. “Some of my patients can wait over a year and there’s no guarantee that they’ll be placed in their own communities,” Forbes says. “If we don’t change what we’re doing, we know these problems will continue to get worse.”

Three-quarters of Canadians gave the overall health services available to them an A or B grade, but less than half gave home care the same rating.

In the survey, 79% of respondents said home care is very or somewhat important to address in a new health accord, placing it after improved mental health services (83%), prescription drug coverage (80%) and palliative care (80%).

The federal government promised $3 billion for home care as part of its 2015 election campaign, and Forbes hopes some of the money will be dedicated towards an innovation fund to scale up already successful home care initiatives.

However, survey respondents tended to disagree with an emphasis on innovation: 55% indicated that new money should be spent on fixing existing health services, rather than modernizing the system.

Forbes argues that a new health accord should also include first steps towards a national pharmacare plan. “No Canadian should be unable to fill a needed prescription because of the cost,” she says. “One immediate step would be providing catastrophic drug coverage to make sure that no one has to pay more than $1500 per year for prescription medication.”

Whatever the final funding commitment, 67% of Canadians agreed that the federal government should require provinces to report back on common indicators. “There is an appetite among Canadians for accountability and in order to do that, we need to know our priorities, our goals and how will we measure them,” says Forbes.