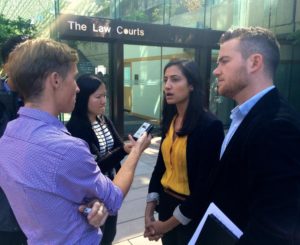 Alison Latimer, Counsel for the Intervenors, and Adam Lynes-Ford, BCHC Staff Member, being interviewed outside BC Supreme Court in Vancouver

In the Supreme Court of BC case between the Cambie Clinic (et al) and the Medical Services Commission of BC (et al), the Counsel for the Coalition Intervenors presented their Opening Statement in court this past Wednesday.

The following excerpts are taken from the official transcript of the Statement.

“The intervenors we represent are four individuals – two patients and two physicians – and two organizations – the BC Friends of Medicare Society (also known as the BC Health Coalition) and Canadian Doctors for Medicare. Our clients include some of the most vulnerable beneficiaries of BC’s universal public health care system, who stand to lose the most in this case, if the fundamental and core principle that every British Columbian should have equal access to physician and hospital services is undermined. Our clients also include physician providers of health care committed to the principles of universality and equal access, who would shoulder the damaging consequences if our publicly-funded single payor Medicare system is weakened.”

“[Members of the BC Health Coalition] are very concerned that the shift to a parallel for-profit private system would reduce resources and capacity in the public health care system to provide for patients, would establish harmful incentives for longer wait times in the public system, and would make it even more difficult to implement the necessary reforms we need to improve the public system. Despite the plaintiffs’ claims to the contrary, we expect that you will hear considerable evidence to support the validity and strength of these concerns.”

“In short, the Coalition Intervenors are here to advocate for all of those British Columbians who rely on the public system, and whose right to equitable access to health care without regard to financial means or ability to pay – the very object of the legislation being attacked – would be undermined if the plaintiffs were to succeed.”

“From the perspective of the Coalition Intervenors, what the plaintiffs seek flies in the face of what have been the historic and underlying objectives and rationale of the British Columbia and other Canadian medicare health insurance programs since their very outset, namely, access to medical care for all based on the same uniform financial terms and conditions, that is, regardless of ability or willingness to pay.”