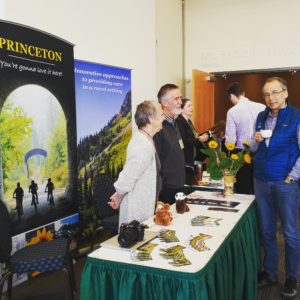 The following article appeared in the March 2017 issue of BC Rural Update, the online news letter of the Rural Coordination Centre of BC:

“In 2012, the community of Princeton was in crisis. There was only one physician on-call for the community of nearly 3,000 people, the ER was closed for four nights a week, and there was a shortage of nurses, medical office assistants, and laboratory staff. Through the combined efforts of the Support Our Health Care (SOHC) group, the Cascade Medical Centre, the Princeton General Hospital, and allied health care workers, the community was able to recruit and retain additional health care staff and work with several stakeholders to restore existing services, and even introduce new specialist clinics to the community.

Princeton locals Ed Staples and Nienke Klaver, are two of the founding members of SOHC who have worked tirelessly to advocate, coordinate network, and support the community’s health care professionals. In a conversation with RCCbc last year, Nienke mentioned tongue-in-cheek that SOHC has become a retirement project for her and Ed! We salute the efforts of SOHC in enabling the transformation of Princeton from a community in crisis to one that is now stable, and look forward to seeing what innovative programs the community will put forth over the next few years.”