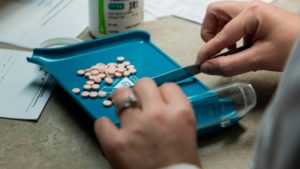 A group of Canadian healthcare leaders wants pharmaceutical companies to have to disclose how and why they pay people who prescribe their drugs, saying it would show potential bias and help build trust.
Seventeen people signed an open letter sent to Health Minister Jane Philpott this week, saying Canada should follow the lead of countries such as France, Denmark and the United States, which require pharmaceutical companies tell the government about payments to prescribers as small as $10 US.
• Read the letter here
Dr. Chris Simpson, vice-dean of the Queen’s University medical school in Kingston, Ont., and signee of the letter, said these companies can pitch their products to doctors by hosting them for a lunch and giving a talk about a drug or giving them free samples for patients who couldn’t otherwise afford them.
“I think it’s important to point out these payments aren’t nefarious or bad, it’s just that when payments are made from a drug company to a prescriber who may be prescribing drugs made by that company, that there may be biases introduced,” he said.
“These biases may not even be bad, they just need to be recognized and put into context.”