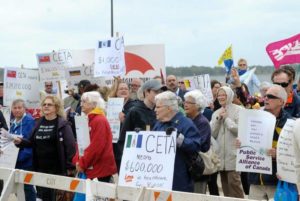 Second, Dr. Day points to wait lists as evidence patients need the right to seek private care. However, that right already exists. Doctors can opt out of the public system and patients are free to pay the price for private service. What does not exist is the right to charge patients more than the public fee while at the same time collecting the public fee from the province. Using private insurance to pay the extra fees is also not allowed by law. In other words, it is against the law to use the public purse to subsidize private profits.

These two provisions, the ban on extra billing and the ban on private insurance, exist to ensure health care is delivered based on need, not the amount of money one can pay. A single payer system ensures both that administrative costs are contained and that service fees are not inflated to produce a profit. Everyone is covered. Demographic factors like age and health status cannot affect coverage; unlike with private insurance systems. And while it is the law in British Columbia that is being challenged, these protections are at the heart of our national health care system and in fact are required under the Canada Health Act. A win for the private clinics could spell the end for our universal, single payer health care system in every province.

What is particularly unfair is that Dr. Day never has to prove his claim that adding a private, second tier will do anything to alleviate wait times. He will point to long wait times and assert people should have the right to seek private care. He has nothing to lose claiming the private sector is better. He never has to prove it. And, if his court case succeeds he can charge extra fees simply to treat people faster.

Evidence from around the world demonstrates that two-tier health care does not reduce wait times. Wait times in the public sphere tend to increase when there is financial incentive for doctors to spend more time in the private sphere. Resources are pillaged from the public system. Further, for-profit clinics also tend to reject the more medically complex cases in favour of the most straightforward for quicker turn around and high volume.

It is not surprising that this case is taking place in British Columbia where the wait lists are some of the longest in the country. The provincial government has recently embarked on a strategy to reduce surgical wait times with a $175 million investment as well as key operational changes. A pilot project in Richmond B.C. using these methods reduced wait times from 20 months to five months.

There are real, evidence-based solutions that strengthen our public health care system and keep it both effective and fair for everyone. Let’s focus on what really works.