We are at a turning point in the Cambie Case – the Plaintiffs (Cambie) will complete their part of the case by the end of this month. Starting in November, the other parties, including our intervenor group, will have their say. The Defense will start their case in January 2019.

Brian Day’s cross-examination:
Brian Day, CEO and President of Cambie Surgeries Inc., started this Charter Challenge back in 2006 after he learned his clinics were going to be audited by the BC Government. The audit was triggered by dozens of complaints by patients who complained they had been illegally overbilled at Cambie’s clinics.

Finally, last week, Brian Day took the stand and was cross-examined about his affidavits, his public statements and his business practices. His time on the stand was both confusing and illuminating at the same time, with Day contradicting himself repeatedly throughout the three days. For a more detailed description of his cross-examination, click here.

The provincial lawyer concluded his cross-examination by accusing Day of fraudulent billing activity at his private clinic, stating,
“I’m going to suggest, Dr. Day, that it’s quite remarkable that your physicians are prepared to accept a cheque, the basis for which they have not been told, over a period of years, with no documentation anywhere, nothing in writing explaining what the basis of that payment is, and I’m going to suggest that that is a very suggestive arrangement, a very unusual and a very suggestive arrangement…of the company’s awareness that what was going on was not legitimate, that it was, to…use your terminology, fraudulent.” 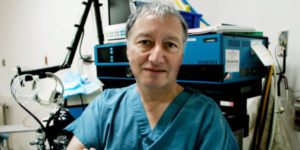 The Case – what comes next:
Now, our lawyers are working with our two key experts before they take the stand to be cross-examined by Cambie’s lawyers: on November 26, Dr. Marie-Claude Premont (an expert on the impacts of the Chaoulli decision in Quebec) and on December 3, Dr. David Himmelstein (an expert on the relationship and links between the US and Canadian health care systems).

Then, in January, the BC Government, who are the Defendants in this action, will argue their case. Their case will conclude by April 2019, followed by Closing Statements by all parties later that spring. Finally, there will be the Judge’s ruling, which will come sometime in the months following the end of the trial.

Extra-billing and the injunction application:
Extra-billing is a key focus of the Cambie case – Brian Day is trying to make it possible for doctors to extra-bill (to charge patients unlimited amounts for any procedure).
In April, the government enacted legislation increasing the fines that doctors and clinics could receive if they extra-billed patients for services covered by MSP, along with other protections for patients.

In reaction to this move, Cambie applied for an injunction to stop the enforcement powers (or in other words, to be able to continue to extra-bill) until after a judgement is made on the entire Cambie trial – which could be another year. Judge Winteringham, who heard the injunction application, will make her decision within the month. In the meantime, the start date for the new patient protections is on hold.

Public health care matters and we appreciate that you are here with us fighting so that everyone gets the care they need, when they need it, where they need it, and not only if they can afford it.

Without your support, we would not have been able to continue to hold Brian Day and Cambie Surgeries to account, both in the courtroom and in the media.

We are working to ensure that not only Brian Day’s false promises (that two-tier health care will improve wait times) are debunked, but that the public knows what this case is really about: removing the protections that ensure patients can get care based on their need and not their ability to pay.