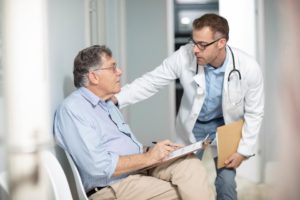 In a shocking development that could transform the medical profession, the International Journal of Health Services published the findings of a study titled, “Primary care, specialty care, and life chances.”

Using multiple regression analysis, the researchers concluded that “primary care is by far the most significant variable related to better health status,” correlating with lower mortality, fewer deaths from heart disease and cancer, and a host of other beneficial health outcomes. By contrast, and perhaps equally deserving of shock-value, the researchers determined “the number of specialty physicians [i.e., surgeons, cardiologists, orthopedists, etc.] is positively and significantly related to total mortality, deaths due to heart diseases and cancer, shorter life expectancy,” along with a host of other worrisome health outcomes.

What might these findings mean for the future of medical care?

“From a policy perspective, a likely implication is to reorient the medical profession from its current expensive, clinically based, treatment-focused practice to a more cost-effective, prevention-oriented primary care system,” according the study’s research abstract, which was published July 1, 1994.

That’s correct, the study was published 25 years ago.

This isn’t a belated April Fool’s joke. It’s a reminder of medicine’s reluctance to change in the face of powerful data. Instead of acknowledging the inconvenient facts and heeding the conclusions of the study, the healthcare system hasn’t budged in the last quarter century.

As a result, our nation’s primary-care problem has only gotten worse. So, too, has the health of American patients.

The most recent study to analyze the value of primary care – published February 18, 2019 in JAMA Internal Medicine – not only confirms decades of prior research, but also spotlights troubling trends in workforce planning, physician reimbursement and residency training.

The study’s research team, a Harvard-Stanford collaboration led by Dr. Sanjay Basu, examined life expectancy rates in the United States from 2005 to 2015. The team found that adding 10 primary care physicians to a population of 100,000 people is associated with an average life-expectancy increase of 51.5 days. That’s compared to a 19.2-day increase for an equal number of specialists.

In other words, adding 10 primary care physicians has a 250% greater influence on life expectancy than an equivalent bump in specialists.

Nevertheless, the research also found this concerning fact: When looking at the overall U.S. population, the density of primary care physicians declined by 11% between 2005 and 2015, falling from 46.6 to 41.4 per 100,000 people.

In a Stanford press release, Basu predicted that “despite the clear correlation between better health and primary care, the number of primary care physicians is likely to continue to decline.”

He’s absolutely right. In the United States, primary care is like healthy food. We all know it’s good for us, but most Americans prefer the burger on the menu over the salad.

And, in that sense, the joke’s on us: One of the few things scientifically proven to increase longevity is the very thing patients, U.S. legislators and healthcare leaders don’t fully appreciate or rally behind.

At the heart of this data conflict is an American medical culture with deeply ingrained perceptions, values and norms that all-too-frequently clashes with the science.

For example, the culture of medicine values all doctors, but it values doctors who deliver immediate and visible results the most. That’s not only bad news for primary care physicians and their relative status in the medical profession, it’s bad news for patients.

Meaning, if Patient X lives until his nineties, no one can be sure whether he would have had a heart attack or developed cancer without the work of his primary care doctor. By contrast, when a cardiac surgeon unblocks the blood vessels to the heart or a general surgeon successfully removes a large tumor, Patient X knows exactly who saved him.

Therefore, Americans label cardiologists and neurosurgeons as “life savers,” but not the primary care doctors who keep them off the operating table in the first place.

These faulty perceptions, shared by patients and medical professionals alike, have serious and far-reaching consequences. Look at the distribution of money, for starters.

The most recent physician compensation report shows primary care doctors earn an average salary of $223,000 whereas specialists make an average of $329,000, with orthopedic surgeons earning close to half-a-million dollars annually.

From an economic perspective, paying specialists nearly 50% more than the primary care physicians is illogical. It only makes sense from a cultural perspective. Primary care isn’t perceived as prestigious, sexy or heroic. Therefore, it’s relegated to a lower status tier and paid accordingly.

On March 15, 2019, approximately 30,000 graduating medical students gathered at their respective schools for “Match Day,” the annual rite of passage that invites newly minted doctors to tear open their envelopes and find out which residency program has selected them.

And despite the dire shortage of primary care physicians in the U.S., nearly 1,000 medical school graduates were left empty-handed that day. Those not selected didn’t fail their requisite courses, clinical rotations or national exams. They didn’t match because there were more applicants than available training positions.

Residency training programs throughout the country are administered by hospitals and funded by the federal government through Medicare. The program pays equal dollars to hospitals, regardless of whether that money is used to train a primary care resident or a specialist.

Thanks to a U.S. insurance system that doles out much higher reimbursements for complex interventions than for primary care, it’s no wonder hospitals prefer to train residents in specialties like orthopedic surgery.

If we have a national shortage of primary care physicians, why not add enough primary-care resident spots to train every new graduate? If we assume it costs $100,000/year in salary and training for each additional resident, the total expense for this program would be $100 million dollars. That’s less than 0.003% of the $3.6 trillion Americans spend each year on healthcare with a guaranteed return on investment.

And since rural communities and minority populations are being hit hardest by the shortage, why not establish a national program that forgives the student-loan debt of any newly trained doctor who agrees to two or three years of primary-care service in underserved areas? The cost to the government would be offset long-term by improved community health and reduced hospitalizations.

And if the agency that administers Medicare didn’t think we could afford to staff all these new primary-care positions, why not pay hospitals less when their residents train in specialty departments? And if we wanted to correct the “supply-demand” mismatch among practicing physicians all across the country, why not increase Medicare reimbursements by 10% for primary care and lower them by 10% specialty physicians?

As logical as these data-driven changes would be, don’t expect healthcare leaders, policymakers or patients to jump on board. When it comes to making important decisions about healthcare, culture crushes data every time. As a nation, we to prefer burgers to salads.

Dr. Robert Pearl is a former healthcare CEO who teaches at Stanford. More than 10,000 people subscribe to his “Monthly Musings on American Healthcare.” Follow him @RobertPearlMD

I’m passionate about transforming the American healthcare system and helping people understand the consequences of their medical decisions. I previously served as CEO of The Permanente Medical Group, the largest medical group in the nation, and as president of the Mid-Atlantic Permanente Medical Group. In these roles, I was responsible for 10,000 physicians, 38,000 staff and the medical care of 5 million Americans on both the west and east coasts. I authored the Washington Post bestseller, “Mistreated: Why We Think We’re Getting Good Healthcare–And Why We’re Usually Wrong,” and am a board-certified plastic and reconstructive surgeon, a clinical professor of surgery at Stanford University, and on the faculty of the Stanford Graduate School of Business. The views I express here are my own and do not necessarily represent those of Kaiser Permanente. Follow me on Twitter @RobertPearlMD.