A NEW PROGRAM FOR RIDGEWOOD LODGE

If the eyes are a window to the soul, then our ears may be the portal to our memory.

Music as therapy for Alzheimer’s patients has received a great deal of attention over the past several years. In 2006, Dan Cohen founded an organization called Music & Memory based on the idea that if he ended up in a nursing home, he wanted to be able to listen to his favorite ‘60‘s music.   After discovering that none of the 16,000 long-term care facilities in the United Stated used iPods for their residents, he volunteered to create personalized playlists on iPods for residents at a local nursing home in New York City. Music & Memory has never looked back. Since its inception, the organization has “implemented iPod personalized music programs in hundreds of care facilities throughout the U.S. and Canada.” By providing access and education, and by creating a network of certified eldercare facilities, Music & Memory aims to make this form of personalized therapeutic music a standard of care throughout the health care industry.

Coalmont resident, Diane Sterne learned of the Music & Memory personalized music program and brought it to the attention of Support Our Health Care (SOHC). Nienke Klaver, SOHC Secretary, is now working with Barb Gagnon, Ridgewood Lodge Recreation Director, to establish the program in Princeton. In an interview with Gagnon, she told SOHC that she asks new residents and their families what type of music they like to listen to so she can get a feel for their interests. “You can really tell when someone likes a piece of music or when it soothes them”, she said.

Gagnon related an incident when a church group came to Ridgewood to sing songs with the residents. One member of the group played the violin. Gagnon happened to mention that one of her residents used to play the violin as a child and would she be allowed to let her hold the instrument.  The violin was handed to her and right away she put it under her chin, held the bow and started to play along with the music.  She hadn’t played since she was a teenager, but holding the instrument reawakened her memory and she just started to play. END_OF_DOCUMENT_TOKEN_TO_BE_REPLACED

END_OF_DOCUMENT_TOKEN_TO_BE_REPLACED 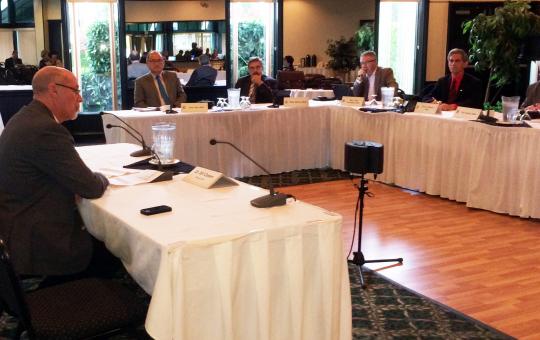 Dr. Bill Cavers, President of Doctors of BC, addresses the Select Standing Committee on Finance during its hearings on Budget 2015

In response to requests from Alex Atamanenko, Boundary Similkameen MP, and Jackie Tegart, Fraser Nicola MLA, SOHC has made a written submission to the BC Select Standing Committee on Health. The Select Committee is gathering information to address the following questions:
1. How can we improve health and health care services in rural British Columbia? In particular, what long-term solutions can address the challenges of recruitment and retention of health care professionals in rural British Columbia?
2. How can we create a cost-effective system of primary and community care built around interdisciplinary teams?
3. What best practices can be implemented to improve end-of-life care?
4. How can we enhance the effectiveness of addiction recovery programs?

To read SOHC’s submission, click on the following link:
pdf Submission to BC Standing Committee on Health – final

Other organizations have also made submissions. The following is from the BC Federation of Community Health Centres:
BCFCHC-Submission-to-BC-Standing-Cttee-on-Health-Dec2014

SOHC will post submissions from other organizations as they become available.