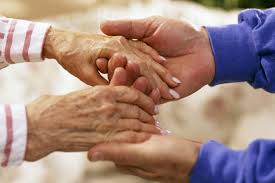 From:
Support Our Health Care (SOHC) Society of Princeton, BC

The Support Our Health Care (SOHC) Society of Princeton has prepared the following submission regarding the proposed sale of Retirement Concepts to the Anbang Insurance Group. In a letter sent to the Honourable Minister Navdeep Singh Bains, dated December 7th, SOHC requested an extension of the period of review by the Investment Review Division to allow for an adequate response from concerned organizations. Subsequently, we were contacted by Patricia Brady, Director General, Federal Investment Review Division, who invited us to meet with her by telephone to discuss our concerns. A teleconference was held on December 15 with Ms. Brady, Matthew Dooley (Director, Investment Review Operations) and five members of the SOHC Executive.

We appreciated the opportunity to discuss this issue and were impressed with the information that was provided and the clarity of their response to our discussion points and questions. At that meeting, we informed Ms. Brady that we would be preparing a written submission outlining in greater detail our perceptions and concerns. END_OF_DOCUMENT_TOKEN_TO_BE_REPLACED Premier Christy Clark said recently that the Medical Services Plan needs an overhaul. What is your position?
How we derive revenue to support our health-care system is best left to cabinet. We must bear in mind that federal-provincial transfer payments for health care have shifted from 50:50 to 25:75. We also, as Canadians, need to ask ourselves what scope of health care we want and END_OF_DOCUMENT_TOKEN_TO_BE_REPLACED 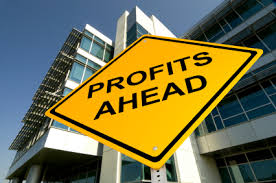 On November 28, the Toronto Globe & Mail reported that Chinese based Anbang Insurance Group intends to purchase Retirement Concepts, a BC based corporation that operates 24 long term care facilities in Canada, including the Summerland Seniors Village in the Okanagan.

Support Our Health Care questions this proposed sale and supports organizations like the BC Health Coalition, Friends of Medicare and the Hospital Employees Union in their efforts to stop this takeover bid, estimated to be over a billion dollars. Under federal law, any deal larger than $600 million triggers a review under the government’s Investment Review Division.

As stated by Andra Azocar, Executive Director of Friends of Medicare, “This sale is another alarming sign of how private continuing care decisions are driven by profit motives instead of what’s best for patient care. A distant and multi-billion dollar insurance company is about the exact opposite of who we need responsible for the care of our loved ones . . . we must insist that this sale be rejected so that we can refocus our system on care that is responsive and driven by local needs, and ultimately by the public sector.”

Hospital Employees Union (HEU) secretary-business manager, Jennifer Whiteside says that “Selling BC seniors care facilities to an offshore insurance company is not in the interest of BC health care workers, seniors, or our health care system.”

Innovation, Science and Economic Development Minister Navdeep Bains said in the House of Commons last Tuesday, that he will scrutinize the takeover to ensure it’s not hurting Canada. “These are done on a case-by-case basis and, over all, our objective is very clear. We are going to do what is the net benefit for Canada. We are going to make sure that we advance our national interest and when we make a decision, we will make that public.”

BC Health Coalition co-chairs, Edith MacHaffie and Rick Turner, have sent a letter to the Minister asking to have the timelines for the review of this deal extended “in order for interested stakeholders and the public to prepare and share their views on this proposed takeover.”

The SOHC Executive has also sent a letter to Minister Navdeep Bains outlining our concerns over this deal and supporting others in their call to extend the review timeline to allow information to be shared and public concerns heard.

letter in the Comox Valley Record 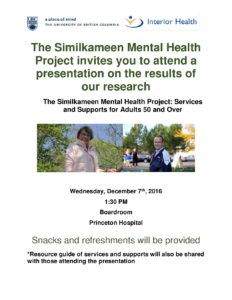 The public is invited to a presentation on recent research conducted by the University of British Columbia on seniors mental health in the Similkameen Valley, to be held on December 7 at 1:30 pm at Princeton General Hospital.