The following quote is taken from a February 27 article in The Tyee by Scott Sinclair and Stuart Trew:

“In the eagerness to portray Canada as open for business and to lock in binding foreign investor rights, we must ask who is looking after the interests of vulnerable groups such as seniors, employees in the private health care sector, or indeed the Canadian taxpayer? A publicly financed, not-for-profit solution to the rising demand for long-term care is by far the better option. It would create high-quality care, decent-paying jobs and benefit from greater accountability.”

To read the full article, click the following link:

Recently the federal government released the Draft Federal Framework on Lyme Disease. The Framework was written by the Public Health Agency and is based on information gathered from the 2015 online consultation process and the conference of Spring 2016. They are asking for public comment to be submitted by March 8, 2017 (see below).

The following is from a letter from Elizabeth May, MP Saanich-Gulf Islands and Leader of the Federal Green Party of Canada:

“The framework is required to meet the guidelines set out in my Private Member’s Bill, which include the following:

END_OF_DOCUMENT_TOKEN_TO_BE_REPLACED 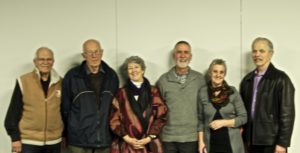