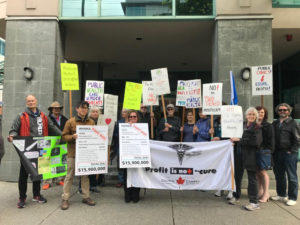 Vancouver and Kelowna, BC – Today, health care workers, seniors and other public health care supporters presented a symbolic $15.9 million invoice to False Creek Surgical Centre in Vancouver and the Okanagan Surgical Health Centre in Kelowna on behalf of the public.

Both clinics are suspected to be two of the many BC private clinics unlawfully extra-billing patients. [1] [2]

Extra-billing is an unlawful practice where doctors or private clinics charge a patient for a health care service that should be provided at no cost because it is publicly insured as necessary care.

The $15.9 million was the estimated amount of extra-billing in BC this year, based on the audits of four clinics (3 audits completed for the year 2015-2016 and an earlier audit). [3] If BC does not stop the unlawful extra-billing, there may be more fines to come.

“With the growth of private clinics and the lack of the enforcement of extra-billing in this province, BC has some of the longest diagnostic and surgical wait times in Canada. The government’s new strategy to complete thousands more surgeries and diagnostic tests in the public system is one step in the right direction,” said Rick Turner, BC Health Coalition co-chair.

“With the recent announcement to bring the full Medicare Protection Amendment Act into force and crack down on private clinics who extra bill, the current provincial government is taking responsibility to ensure private clinics are not unlawfully extra billing patients,” Edith MacHattie, BC Health Coalition co-chair. “This is great news for patients and our public health care system.”